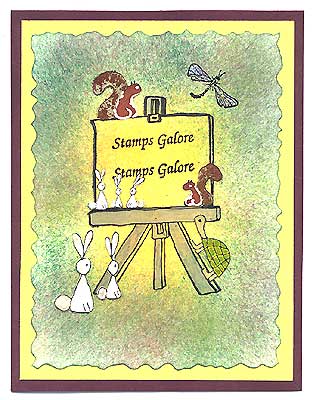 “Easel”, “Dragonfly, Sm.”,  “Three Bunnies, Lg.”,  “Three Bunnies, Sm.”,  “Two Squirrels, Lg.”, and  “One Turtle” were stamped in black Memories on yellow card stock that had been sponged with green and pink leaving the center clear where the easel was stamped. All the animals except the dragonfly were stamped again, cut out and mounted with foam dots. Images were colored with pencils and crystal lacquer was applied to the turtle’s shell. Glitter was applied to the dragonfly’s wings. Puff balls were added to the rabbit’s tails. The card was trimmed with decorative scissors and layered over yellow, brown and white card stock. Card by Thalia Sledge.